RhinoInterior Pro is the full version of the software and provides the user with the so-called Back-end for the construction of custom templates and articles that together with the already large archive of over 500 articles of furniture and various objects present in version RhinoInterior Easy, allow even the most demanding of users to have a complete software for 3D projects in the field of furnishing. 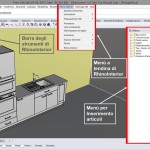 RhinoInterior is designed for manufacturers of furniture, large or small workshops, and also caters to designers who need a 3D design with custom elements, The accuracy in drawing that Rhino 3D and RhinoInterior Pro tools offer, to obtain precise 3D designs from which to obtain the information necessary for the subsequent stages of production, as the cutting of panels, the beading, drilling and ironware management. Everything is coordinated by a series of prints and production cards, further enhanced compared to existing modules in Easy RhinoInterior. As in the Easy version, all items made with RhinoInterior Pro can be used to render processing to get photorealistic images of great effect. This aspect is further enhanced in Pro RhinoInterior, with the ability to insert custom materials.

How does it work:

RhinoInterior Pro provides the user with the same tools of insertion items in the Easy version, with the ability to access the back-end part of the software that enables management of functions by creating or modifying custom archives.

The purpose of RhinoInteior Pro is to organize a database with all the information necessary for the operation of the same within the Rhino interface in addition to creating constructive rules for elements to be inserted into the 3D environment.

The back-end RhinoInterior Pro has an area for entering general information, as the customer lists, listings for price management, and all information useful for the formulation of the next order or quote into production.

In RhinoInterior Pro you can define generating an article in three ways:
- generating a non-parametric element by inserting a pre-built design block.
- generation of parametric elements through the insertion of construction rules , In addition to the definition for the render material.
- generation of hybrid elements, through the inclusion of drawing parts through pre-built blocks and construction rules to the same.

Would you like more information about RhinoInterior?
Please complete the form below to request any information on our products.

We use cookies to make sure you can have the best experience on our website. If you continue to use this site we assume that you will be happy.OkRead....